Sploofus changed the WordPuzzles back to making it possible to guess the puzzle without guessing all the letters. Heee!! I got today’s puzzle in 30 moves. Whoohoo!

Meanwhile, a snag has come up with our casting of How the Steel Beach Tomato Ya-Yas Got Their Groove Back. Optimus Prime may be a) Booked or b) too expensive for us to cast him. I told Gene perhaps we could cast a Go-Bot instead. I mean, I don’t know whose salary would be cheaper…Jessica Alba or Dozer the Go-Bot.

So, this will make our season of Project Greenlight a lot more dramatic.

1) Star Wars wins holiday weekend box office: Duuhhh.
2) Speaking of movies, I thought of two more movies that I must always watch when they’re on TV: Pretty Woman and Beavis and Butthead Do America. Pretty Woman was on TBS back to back last night. Yes, I watched it 1.5 times. Even better, I made Gene watch it with me the second time.
3) Ahh, I think the race losers are finally leaving. GO HOME!
4) Found a cool new site (I think it’s a blog): Tomato Nation. You should go read it because she’s a lot funnier than I am. Make sure to read the part called The Vine, where she gives advice. Very good!

I am such a fucking geek. I’m on Sploofus and I saw that my Sploofus hero is back. Hooray! (He’s using a new log-in, but it’s got to be him). Again, let me remind people who are new to the concept, don’t worry. I’ve got a secret Sploofus crush on a gay Canadian. He is not a threat.

In other excitement, Gene and I have done just about nothing this long weekend. Saturday we went to Cracker Barrel and sushi and yesterday we went for Mexican food near my office and to the grocery store. I also dragged Gene’s ass to the mall so I could buy shorts that I like that fit. Today I vacuumed both offices and am running laundry, which I’m supposed to be folding.

So I guess I should do that. Only 27 minutes until Word Puzzles for the day…yippee!!

The trivia website I was all enamored with has changed their rules a bit. They no longer allow quizzes with less than five legitimate answers. This rules out quizzes where you’re supposed to guess (for example) if “Hotel California” was a song by The Eagles or the Bay City Rollers (it’s the Eagles, BTW, and you can just see yourself out if you thought it was the other option). I had a message from the trivia site telling me that my quiz about square #s has been deleted. I was pretty bummed about it, but went on with my day. 3 day weekend! (Plus, I knew it was a crappy quiz anyway)

Later, I spent some time playing all the quizzes written lately by the person who’d turned me onto the site. Even later, I went to look for new quizzes by this person, to find him GONE. G-O-N-E. I think it’s because most of the quizzes he’d written were like the above example. I wonder if they deleted his account? I hope not!

I guess my point is, I’m thinking of deleting my account on the trivia website. I’m not really writing this for anyone’s benefit but my own, just to think the thing through. I don’t want it to be a reactionary decision, like the kind that happen in a restaurant when the popular manager is fired. Just don’t know.

Anyway, we’re sitting at the table and the wooden thing that holds little ads for what’s on sale in the Cracker Barrel Crap-a-torium and dessert specials is sitting next to me. This month’s little placard is for the origin of the restaurant’s name. It was some such malarkey about crackers in barrels and when the barrel was empty you could put a checker board over the empty barrel and play or have a conversation or whatever. And it concluded with something so geeky, so shit-eating-grinny, like “And we wish things were still that way” or “We try to keep things that way” or “Some things never change.”

I thought about this a moment and told Gene that I thought the real origin of the name of Cracker Barrel was that during the depression, there was no money, so people had to wear barrels. And, also during the Depression, the races were still segregated, so the barrels for white folks were called….Cracker Barrels!

Ha ha ha. Gene looked around and said, “Hey, you’re right, this place is a barrel full of crackers!”

Gene’s out of town. I’d love to say I did all kinds of good and smart things, but we all know I didn’t. Just Sploofus, dinner, cleaned a bathroom (technically I had today “off” but I didn’t do Tuesday’s chore) and now doing some reading. Mmmm, a day of bachelorette-hood is nothing to sneeze at. Then again, I’d love it a lot more if I didn’t love Gene so much. Come hooooooooome. 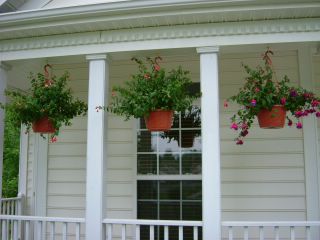 The 3 fuschia, hanging in front of our house. I just realized they really have grown – the center plant has a branch that is now a few inches taller and growing against the edging 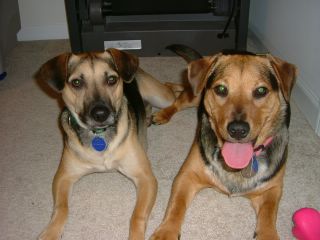 And as always, Scooby and Betty. The pink thing in the bottom right is the peppermint bone I bought in Detroit at the airport. 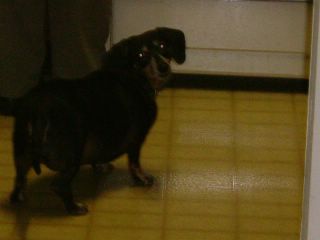 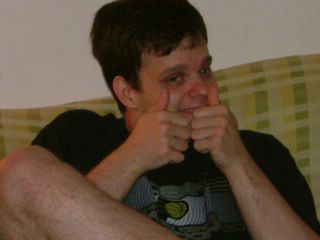